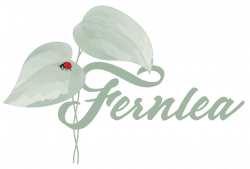 We always wanted bees at Fernlea, the reasons are numerous from; pollination to the obvious ones of collecting and eating our own honey. We have invested in a hive, tools, and essential protective clothing, done heaps of research, and worked with a hobbyist friend. Although we were “Bee Ready” our challenge has been that bees need attention, you can’t just set up the hive and let them get on with it, and as we were only going up to Fernlea on the weekends having a hive really wasn’t a viable option.
However, in 2020 we moved permanently to Fernlea and so everything and anything became a possibility. 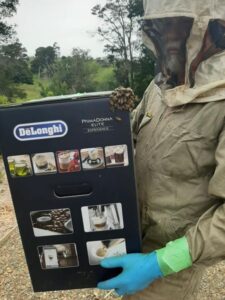 It so happened I was having a girls evening with ladies in the neighbourhood when one mentioned that a swarm of bees was in a tree at the entrance to her property. The next morning while eating bacon and our own fresh eggs, I mentioned the swarming bees to the Hobbit (aka Les Janett) and immediately I could see him ‘fire up’ with purpose and a new focus other than what was at hand, namely our quiet Sunday breakfast.

Bees naturally swarm in the spring as a way of expanding the colony, what happens is that the hive grows too big for one queen and so another queen is made, at which point it is usual for the first queen to fly off with half the colony. Swarming is a risky business for the bees because they may not find a suitable place and they could all die, but it is necessary for reproduction.
The swarm will stop for a day or two wherever the queen decides to rest, and because of this short window of time the Hobbit knew he had to be decisive if he was to capitalise on the opportunity.

We could buy what is called a ‘nuc’ to start up our hive but collecting them himself and giving the bees a home was way more fun.
I found myself sipping the last of my morning coffee as I watched the Hobbit collect up a Delonghi box (we had just bought a new coffee machine) jump in the car, and head up the driveway. 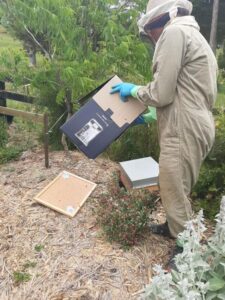 Still soaking up the sun and contemplating my day ahead, and even before I got moving, the Hobbit was back. He informed me, at speed, that he found the swarm in the tree, it was so heavy it had broken the branch but he had managed to get half of the bees into the box before being stung on the eyebrow so he was back to get the protective bee kit. For a second time I saw him head up the drive leaving a wisp of dust in his wake.

Another 20 minutes and he was back again, he parked the car with the Delonghi box full of bees on the back seat, and went about setting up the hive. He had to get it out of the shed, he used the leaf blower to get the dust off and then started to scout for the perfect position to set it up. He wanted somewhere where it would get morning sun, be protected from the wind, and close to flowers. I was dispatched to make a weak syrup of brown sugar and water. The tired bees would be grateful for the little energy drink, he told me.

With the hive perfectly positioned and the sugar drink in place, he calmly collected the box of bees and gently tipped them into the hive. He commented on how hot the box felt from all the active bees. Obviously, I was hovering nearby taking photos and on standby for any critical last-minute instructions, but it all went pretty well.
We were very excited to have added to our Fernlea family, and checked on the bees regularly throughout the day, hoping that they would like the home we had offered them and not swarm off.

By lunchtime they seemed settled and were displaying all the right behaviours of a happy and contented little hive!

Over afternoon tea of freshly baked biscuits infused with herbs and edible flowers, I told the Hobbit that I was considering giving all our bees names. “Good luck” he chuckled, “You know the queen lays around 175,000 eggs per year.”
Some names I am considering are; Buzzy, Fuzzy, Honey, Waxy, Busy… 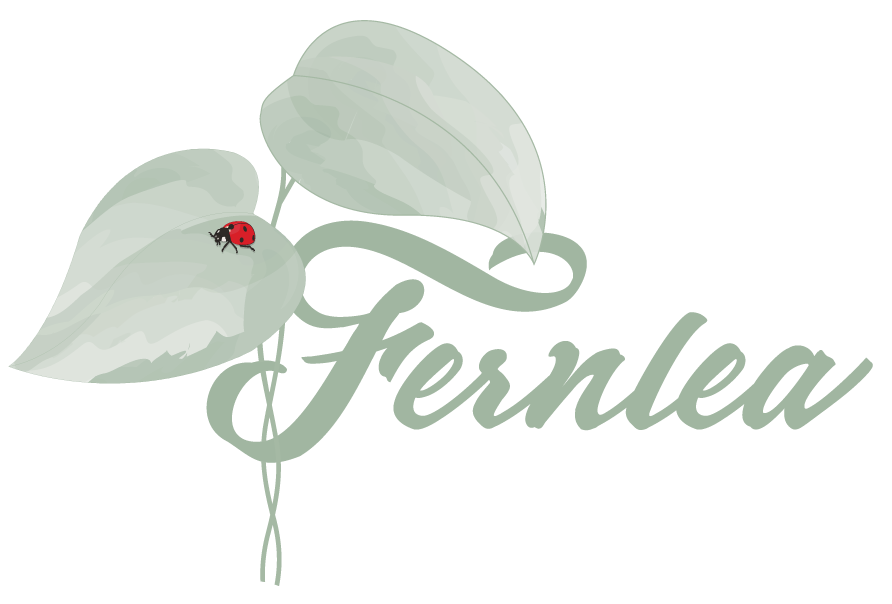 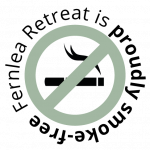